“El monumento original a Lincoln” (CC BY 2.0) by Daquella manera

"Thursday at 7pm, we're tearing this motherf–ker down."

Protestors set a date and time to attempt to tear down the Emancipation Memorial in DC depicting President Abraham Lincoln standing over a freed slave.pic.twitter.com/zQKuSiqGaN

The Lincoln Emancipation Memorial was funded by ex-slaves

“Y’all Don’t Even Know the History of this Statue But You Want to Tear it Down!” – Black Man to Know-Nothing’s Wanting to Tear Down #Lincoln Statue

One participant noted, “So, I have made my mission to protect that statue. Why not put a sign there that says why it’s there. Our Jewish brothers and sisters around the world have monuments to the Holocaust. In Germany, they even having existing concentration camps for [people] to come in and see. This means that they cannot deny what happened because there are Holocaust deniers. If you remove all evidence of slavery, it’s like it never happened. That’s exactly what’s happening. Let it stand, put up another statue with signage.”

The memorial is located in Lincoln Park and dates from April 14, 1876. As the Washington Post has reported, The whole park was built thanks to “contributions from hundreds of former slaves who wanted to pay tribute to the man who had proclaimed their freedom in 1863, Just after Lincoln’s death, the [Western Sanitary Commission, which aided Civil War victims] had received an intriguing request from a former slave, who sent the commission $5 — her first earnings as a free woman — to help build a monument to Lincoln, ‘the best friend the colored people ever had.’ The commission began a fund-raising campaign and invited former slaves to contribute.”

Frederick Douglass gave a rousing speech at the Memorial’s unveiling 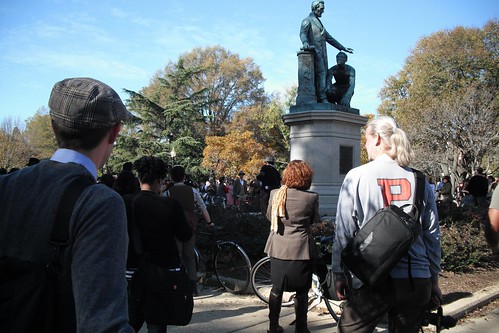 At the unveiling of the Lincoln Emancipation Memorial, Frederick Douglass gave a speech saying, “The sentiment that brings us here today is one of the noblest that can stir and thrill the human heart. It has crowned and made glorious the high places of all civilized nations with the grandest and most enduring works of art, designed to illustrate the characters and perpetuate the memories of great public men. It is the sentiment which from year to year adorns with fragrant and beautiful flowers the graves of our loyal, brave, and patriotic soldiers who fell in defense of the Union and liberty. It is the sentiment of gratitude and appreciation, which often, in presence of many who hear me, has filled yonder heights of Arlington with the eloquence of eulogy and the sublime enthusiasm of poetry and song; a sentiment which can never die while the Republic lives.”

Douglass went on to say, “We, the colored people, newly emancipated and rejoicing in our blood-bought freedom, near the close of the first century in the life of this Republic, have now and here unveiled, set apart, and dedicated a monument of enduring granite and bronze, in every line, feature, and figure of which the men of this generation may read, and those of after-coming generations may read, something of the exalted character and great works of Abraham Lincoln, the first martyr President of the United States.”