The Fraternal Order of Police (FOP), the nation’s largest police union, announced Friday that it is supporting President Trump and thanked him for his law and order calls.

“Public safety will undoubtedly be a main focus for voters in this year’s election,” FOP President Patrick Yoes said in a statement. “Look at what the national discourse has focused on for the last six months. President Trump has shown time after time that he supports our law enforcement officers and understands the issues our members face every day.”

Trump has made law and order and police protection a major focus of his reelection campaign in the wake of national demonstrations over abuse of power by the police and racial discrimination. The FOP said it sent a questionnaire to both Trump and Democratic candidate Joe Bide, and in mid-July and obtained replies from both camps.

On behalf of the 355,000 members of the Fraternal Order of Police, we are proud to unanimously endorse @realDonaldTrump for President of the United States. #FOP4Trump pic.twitter.com/uAF6SWNRnA

“The FOP is proud to endorse a candidate who calls for law and order across our nation. He has the full and enthusiastic support of the FOP,” Yoes said.

The group, which has over 355,000 members, endorsed Trump in 2016 and said they had been snubbed by former Democratic candidate Hillary Clinton, who did not seek their endorsement.

The union said they had circulated the questionnaire answers from Trump and Biden to their representatives, and canvassed them to make a decision.

Group has a track record of endorsing Republicans 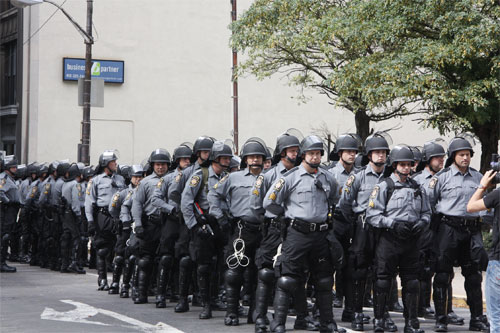 “During his first four years, President Trump has made it crystal clear that he has our backs,” Yoes said. “Our members know that he listens to the concerns of our brothers and sisters in uniform and is able to make tough decisions on the issues most important to law enforcement. President Trump is committed to keeping our communities and families safe.”

The organization did not support a presidential candidate in 2012. They endorsed the Republican nominees in 2008, 2004, and 2000—the late Sen. John McCain (R-Ariz.) and President George W. Bush. It supported President Clinton in 1996.