The Democrat Party and its activists have spent significant amounts of time railing against in-person voting. The left’s argument asserts that because of COVID-19, in-person voting poses a preventable risk.

As such, Democrats are calling for mass mail-in voting, despite the heightened propensity for fraud. In light of this, Americans may be under the impression that Democrats are practicing what they preach and abstaining from in-person voting; of course, this would be an incorrect assumption. 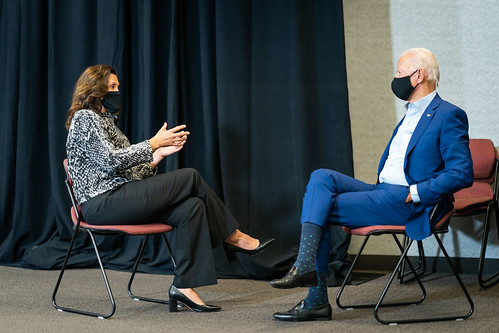 “Made In America Policy Speech at United” (CC BY-NC-SA 2.0) by Biden For President

Breaking news from Washington Examiner confirms that 2020 Democrat Joe Biden voted in person for Delaware’s primary election; the former vice president’s in-person vote happened in spite of his claims that coronavirus has endangered the safety of in-person voting.

Like other Democrats, Biden’s in-person vote shows that he is not abiding by the coronavirus safety precautions that he urges other Americans to follow.

Biden, along with his socialist allies, have claimed that folks advocating for in-person voting are placing lives at risk; however, when the former vice president went to Delaware’s New Castle County Board of Elections office, he apparently didn’t believe that such a visit was placing others in harm’s way.

Hmmm. Not voting by mail? Seems he's straying from the party line.

Social media users have already begun to note that Biden did not vote by mail, despite his calls and his party’s calls for Americans to vote via mail. Some are accusing the former vice president of hypocrisy, citing the in-person voting decision as another example of “rules for thee, but not for me.”

No Word from the Biden Campaign

Thus far, the Biden campaign has not released a statement on why the 2020 Democrat voted in person despite his claims that other Americans shouldn’t do the same.

However, Biden has taken to social media to urge Americans to chip into his campaign. The former vice president is also using social media to push for heavy gun control measures that would infringe upon constitutionally-granted Second Amendment rights.

You are politicking poorly, Joe. The only folks clapping at this goofy comment are already voting for you.

…all you did here is stress out the Dem-curious GOPers that detest Trump.

DM me if you’re looking for a new campaign manager. You need one.

To many Americans, the question still remains: if Joe Biden can vote in person and not by mail, why can’t the rest of the nation follow suit? Unlike the former vice president, Trump and his re-election team have repeatedly warned about the perils of mass vote-by-mail.

Why do you think Joe Biden chose to vote in person, notwithstanding his own calls for the nation to vote by mail? Let us know down below in the comments section!