The black vote is something that Joe Biden and Kamala Harris remain reliant upon in order to have a chance at becoming president and vice president.

Over the course of the 2020 presidential election, Biden has ongoingly let the nation know what he thinks about black voters and none of it is positive. Despite the mainstream media repeatedly giving Biden a pass, if President Trump said what Biden has said about black voters, he’d be relentlessly blasted and slammed for it. 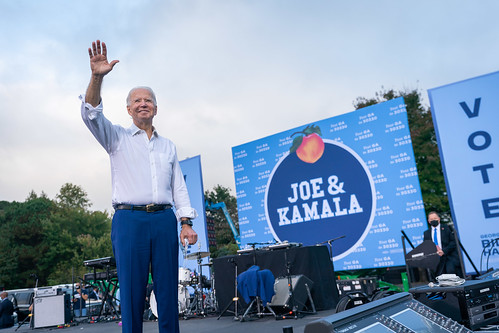 Many Americans are waking up though. Reports this week indicate that black and Latino voters are not turning out for Biden in battleground states. Now, Fox News reports that the former vice president is being held accountable for his rhetoric throughout this election cycle.

Quite simply, Jones stated that the former vice president’s work with segregationists is on the record, as are his claims that black voters “ain’t black” unless they vote for him. Biden’s additional remarks about the black community supposedly lacking diversity of thought and references to black children as “roaches” also aren’t doing him any favors.

No thanks @joebiden, despite what you believe, Blacks do own homes, business, and do send their kids to college. And we are not going to vote for you. You had 47 years and didn’t do nothing. And now you wanna replicate what ⁦⁦@realDonaldTrump⁩ has already done. pic.twitter.com/aJbu3oMh5j

President Trump, on the other hand, has put together a Platinum Plan that is specifically designed to be of value to black Americans. Moreover, the Platinum Plan put forth by the Trump campaign has won support and praise from entertainers like Ice Cube and Lil Wayne.

Finally, the Georgia Democrat explained that in Biden’s 47-year political career, he’s got nothing to show for it. Jones then contrasted this with Trump’s position as the first politician with a “black agenda” in the past six decades.

Taking the Black Vote for Granted

Over the course of the 2020 presidential election, Republicans have criticized Joe Biden and the Democrat Party for assuming that they’re owed support from black voters.

"I was a Democrat until 6 years ago bc I realized when I started my own business that nothing was actually changing in the hood. It's the same. The Democrats are always trying to give a new program that keeps you in the inner city with no idea about how to get out. It's CRAP!" pic.twitter.com/WofKwSoVny

The Trump campaign has heavily partaken in black voter outreach, especially with the group known as Black Voices for Trump. Like others who disagree with Joe Biden, Black Voices for Trump has called out the former vice president’s troublesome political history, coupled with his rhetoric on the campaign trail in 2020.

Do you believe Joe Biden thinks he’s entitled to the black vote? Let us know in the comments section below!