According to the leftist mainstream media, Joe Biden’s campaign is smooth-sailing and on a clear path to victory in the 2020 presidential election.

The Democrat-leaning press has also made a point of touting polls that assert Biden beating Trump; what they aren’t touting, however, is the reality that most of these polls have intentionally oversampled Democrats to get the outcome that fits their narrative. 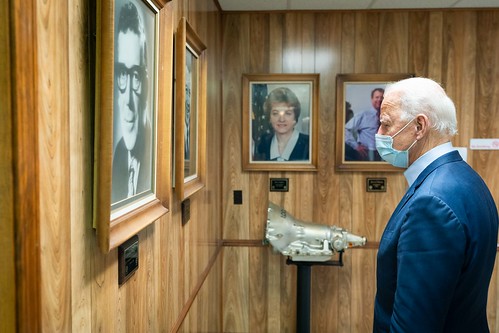 Meanwhile, in reality, Biden’s campaign is struggling. His events are not attracting high turnouts like President Trump’s rallies. Moreover, the former vice president has, in this week alone, claimed to be running for Senate, forgotten the name of Utah congressman Mitt Romney, and made other gaffes while speaking.

In light of all this, Biden’s campaign is attempting to do damage control by bringing in former President Obama to stump on behalf of his former vice president, confirms Breitbart News.

Biden is ultimately hoping that Obama’s popularity within the Democrat Party will be enough to earn votes in swing states. Already, Biden is trailing Trump in various swing states, such as Florida. The Biden campaign also depleted a portion of their funds by trying to campaign in Texas, with little to show for it.

There's a lot at stake in this election. From getting this pandemic under control to building a fairer economy to taking on climate change and protecting our health care, your vote can make all the difference. Register today and make a plan to vote early: https://t.co/Q2RbOQZwv9 pic.twitter.com/chf7XoUwoA

According to an aide for the former vice president’s 2020 campaign, the 44th president will “hit the trail soon” to help Biden get as many votes as possible. Moreover, the Biden campaign remains adamant that Obama has engaged in “other activities” to ensure that his former running mate wins the 2020 election.

Biden, himself, meanwhile, is spending this Wednesday engaging in a remote event to raise money for his campaign.

Hits from the Trump Campaign

Biden’s decision to call upon Obama for help arrives after multiple body blows from the Trump campaign.

The president, his allies, staffers, and supporters, continue to hold Biden accountable for the mistakes and slip-ups he has on the campaign trail. Days ago, the former vice president professed that the Americans who he wants to vote for him are unworthy of knowing where he stands on packing the Supreme Court.

President @realDonaldTrump: We will have created almost 8 million jobs and we lifted 6.6 million people out of poverty, achieving the largest poverty reduction in modern U.S. history pic.twitter.com/pQqyXWKVwl

The Trump campaign has also called out Biden for telling Ohio voters to visit a non-existent campaign site; furthermore, the Democrat nominee remains under a microscope for the questionable foreign ties that his son Hunter Biden shares, among other matters.

All things considered, the Biden campaign appears to have determined that Obama is the last hope as Election Day gets closer and closer.

What do you think about the Biden campaign calling in former President Obama? Will it be enough to take Biden across the finish line on November 3? Let us know down below in the comments section.