Biden’s choice of Senator Kamala Harris as his running mate in the November election is raising eyebrows more than raising Dem Party spirits. Harris’s own run for the nomination was a fiasco, with the senator achieving a mere 7 percent support in her home state of California last year.

By June last year, Harris only reached fourth place, with 13 percent support. After attack Biden for his history of supporting segregationists, Harris briefly took first place in the Democratic Party race in California with 23%.

“American prosecutors wield awesome and terrible powers that lend themselves easily to abuse, and Senator Kamala Harris, formerly the attorney general of California, is an enthusiastic abuser of them.”

But it didn’t last. Harris never enjoyed much support from other elected Democrats in California. Bernie Sanders stole the show.

Hawaii Representative Tulsi Gabbard dragged Harris over the coals in the second debate over Harris’s record as a prosecutor in San Francisco and as California Attorney General.

Harris quickly faded in the polls while Sanders and Elizabeth Warren surged ahead.

As early as last November, with Harris polling at 7 percent, two-thirds of Democratic voters thought Harris should quit the race. This is the woman who will likely become President partway through mentally-fading Biden’s first term, if the pair wins. 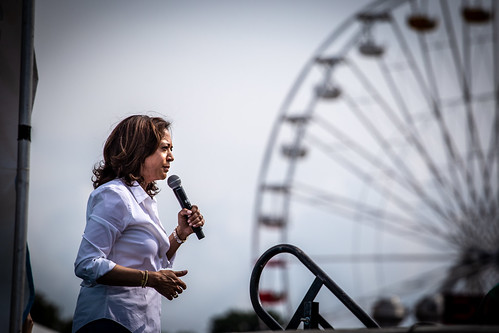 Besides her lukewarm popularity, Harris is an odd choice as running-mate because she said last year that she believes the women who accuse Biden of sexual assault. She has agreed to appear on the same ticket as a man she has publically said she believes to be a rapist.

To quote Harris, “I believe them and I respect them being able to tell their story and having the courage to do it.”

Flores published an article describing how Biden put his hands on her shoulders, smelled her hair and “proceeded to plant a big slow kiss on the back of my head.”

Lappos claimed Biden “put his hand around my neck and pulled me in to rub noses with me…I thought he was going to kiss me on the mouth.”

Caruso accused Biden of putting his hand on her thigh and hugging her “just a bit too long.” Ironically, he did this after she had just given a speech about her experience of sexual assault. Hill alleges that Biden stroked her back inappropriately during a photo op.

High-profile Biden accuser Tara Reade sais she reached out to the Harris campaign last year but received no response. Harris has been accused of double standards in defending Biden against Reade’s allegations.

Biden was the major force behind the hated 1994 crime bill. Between that and Harris’s performance as California AG, the Democrats are running a ticket that should provoke shrill indignation from BLM supporters.