Joe Biden’s cognitive decline is proceeding at an alarming pace. The Democratic presidential hopeful’s senior moments are piling up almost as thick and fast as his moments groping and sniffing young girls. In one recent media appearance, one of Biden’s carers or ‘aides’ had to leap into the TV shot to cut the interview off. In another, Biden boldly declared that, come the November election, he will “beat Joe Biden.” Many are wondering if it is humane to continue to subject him to the campaign.

“I’m prepared to say that I have a record over 40 years, and that I’m going to beat Joe Biden”

He is right though. He’s helping defeat himself every time he speaks. pic.twitter.com/sNMbuKbIY6

In the first case, it’s not clear how or why the carer’s voice was heard. What is clear is that his team saw it as necessary to order the interviewer to cut the segment off before Biden messed it up. Besides being a testament to Biden’s mental fitness, it exposes how strictly his media appearances are managed and how complicit the media is in shoring up his image. Would there be no outcry if news interviews were rigged and scripted in favor of Trump?

Is it treasonous to knowingly promote a presidential candidate in late-life mental decline?

The faster the country opens, the sooner Biden will have to appear at live campaign events without the aid of his staffers and carers. As much as the media will try to rig the coming debates between Biden and the president, it will be next to impossible to put a fig leaf on his mental decline. Besides, is it not treasonous for those close to him to continue to promote him as a presidential candidate? 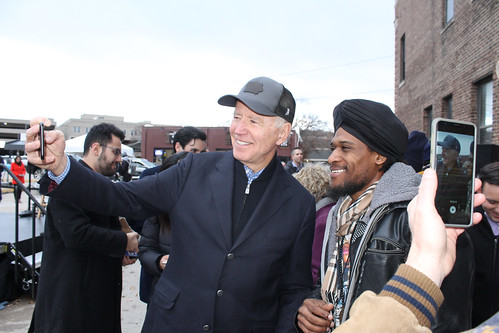 Biden has also been committing more conventional gaffs. He recently claimed on air that if the black man he was speaking to was unsure whether to vote for him or Trump, then ‘he ain’t black.’ You could almost hear the whip cracking in Biden’s remark. This has led to a burst of outrage on social media. The Trump administration has seen record black and minority employment figures. The idea that Trump is a racist is a ludicrous smear cooked up by the Hillary campaign and the complicit media. Trump has been in the media spotlight for 40 years during which time he hasn’t given the slightest hint of racial prejudice, quite the opposite.

Joe Biden got too comfortable and made a joke he shouldn’t have.

Trump made people think this is ok pic.twitter.com/TFYfmSgaLN

Trump made people, like Biden, think this is okay? Liberal logic. Biden also has multiple, mounting corruption scandals from his years as VP to answer for. How will he coherently debate Trump on his part in the origins of the treasonous Russiagate witch hunt or his sons’ nepotistic multi-million dollar dealings in Ukraine and China?