Trump’s acting Director of National Intelligence, Richard Grenell, has declassified information showing that Brennan picked and chose the narrative that suited him rather than following professional standards. The best information at hand at the time that the Kremlin preferred Hillary because they knew what to expect from her. The Russian elite viewed Trump as unpredictable.

Hillary was involved in the Uranium One controversy in which the USA sold 20% of its uranium stockpile to Russia in a high-level bribery scandal. As secretary of state, Hillary also orchestrated the diplomatic ‘reset’ with Russia and made heavy concessions to Russia on US missile defense in Europe.

President Trump has publically voiced his opinion that Russia tried to interfere in the 2016 election but has expressed doubts that Russia favored him.

For 4 years, Democrats have claimed that the evidence for collusion between Trump and Russia was incontrovertible. As more and more documentation is declassified and publicized, it has become clear that these were lies. Democrats who made these public comments made utterly contradictory comments when under oath, as the now public Russiagate interview transcripts show.

Details are also emerging of how Brennan illegally spied on American citizens during his staging of the Russiagate soft coup attempt. US intelligence agencies are allowed to listen in on calls between foreign nationals and Americans if the Americans involved are not the target of the surveillance. By law, the names of these Americans should be masked, that is, hidden from anyone not immediately associated with the investigation. 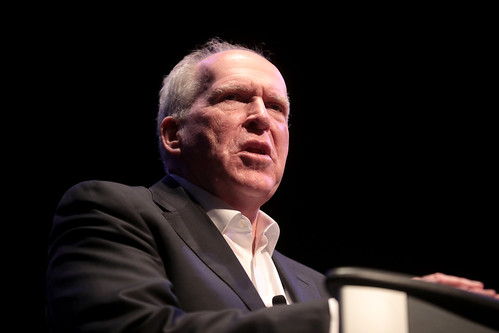 At the end of his administration, Obama pushed through a reform of the process allowing outside contractors to ‘unmask,’ or make available the names of the Americans in these tapped calls. Although government employees are not directly allowed to do the unmasking, they can be given a contractor badge by their superiors and unmask the Americans in that capacity.

.@TomFitton on the wiretapped Flynn phone calls: "The fact that Durham hasn’t questioned [Obama, Biden, Yates, Brennan, Rice] substantially about what went on there is a miscarriage of justice." #Obamagate pic.twitter.com/c6OHDI7N2A

Obama and Brennan set up monitored calls that were officially targeting foreigners to record the Americans involved and unmask them as part of the Russiagate soft coup attempt. Acting Director of National Defense Richard Grenell is preparing to publish the names of the officials involved in this illegal scheme. Sources say there is a lot more to come in revelations of Obama era corruption.