The notion of a nationwide mask mandate has repeatedly come up throughout this year’s general election.

To be precise, Democrat nominee Joe Biden and others in his party endorsed and called for a federal mask mandate. This is something that President Trump, on the other hand, stated that he wouldn’t implement. The 45th president respects the fact that not everyone wants to or can wear a mask. 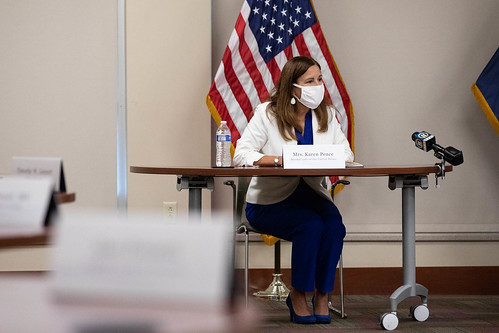 Biden, on the other hand, has repeatedly flip-flopped on the mask issue. On more than one occasion, the former vice president claimed that he’d implement this edict as president, only to later state that the Constitution wouldn’t allow him to do so.

Yesterday, the former vice president traveled to Michigan in order to speak with union workers. During this period, Biden used the time to, once again, push for a nationwide mask mandate. The Democrat professed that the latest news on the virus must serve as an “American moment,” rather than a political one.

In doing so, Biden also stated that wearing a face covering is “following the science” and “not a matter of politics” now. In calling for “masking mandates nationwide,” Biden declared that politicians in all levels of government should require individuals to cover their faces, whether they like it or not.

Be a patriot. Do your part.

Wearing a mask will protect you. But it will also protect those around you — your mom, your dad, your son, your daughter, your neighbor, your co-worker.

Don’t just do it for yourself. Do it for the people you love.

While making these statements, the former vice president did not acknowledge health issues like breakouts of acne and “mask mouth,” both of which are linked to the frequent usage of face coverings. As a matter of fact, none of the proponents of mandatory, forced masking have issued any public statements about these very real health issues.

The Latest on the Mask Debate

Despite Biden’s calls for nationwide compulsory masking, Americans appear to be moving in a very different direction.

Mississippi recently scrapped their statewide mask order; likewise, Florida has also reopened and announced that the state and local governments may not fine individuals who don’t wear face coverings.

Michigander here. Tired of her.

Just yesterday, the Michigan Supreme Court ruled against Governor Gretchen Whitmer, stating that all emergency orders she imposed after April 30 were beyond her legal bounds.

What do you think about Joe Biden’s return to a push for nationwide mask mandates? We want to get your take in the comments section below!