The Democrats have spent years setting Russia up as the boogeyman against which America and the free world is to define itself. In their world, every time the sun doesn’t shine or a kitten goes missing, it must be Russia’s fault. Meanwhile top Dems like Biden has been involved in a massive corruption scandal, prying Ukraine out of Russia’s influence so he can enrich himself and his son. Biden openly did what Dems failed to blame Trump of doing, blackmailing the Ukrainian government for personal benefit. Biden made sure his son’s Ukrainian energy company was not investigated for funneling millions to the family coffers lest Ukraine miss out on hundreds of millions in US military aid.

For President Trump, the main threat to America is not Russia, which has an economy the size of New York state or South Korea, but China, with almost a quarter of the world’s population and an economy rivaling ours in size. 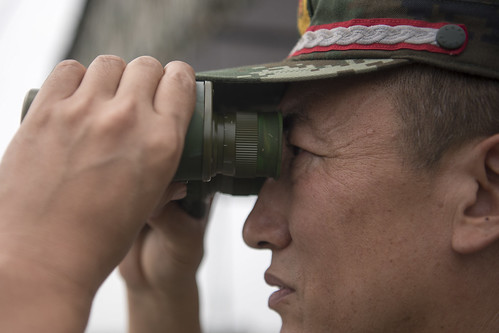 “CJCS meets PRC troop in Shenyang” (CC BY 2.0) by Chairman of the Joint Chiefs of Staff

Case in point, this week, an officer of China’s People’s Liberation Army (PLA) was arrested at LAX while trying to take medical research materials out of the country. The officer, Xin Wang, appears to have lied when applying for a US visitor visa as part of a work-study exchange program, according to the Department of Justice.

Xin Wang is a scientific researcher within the PLA. He was attempting to get on a flight to Tianjin, a major Chinese port city near Beijing. The communist military officer faces visa fraud charges.

Wang was admitted to the US a year ago with permission to conduct scientific research at UCSF. His J1 non-immigrant visa application contains clear evidence of fraud, such as the claim that his military service ended in 2016.

While Dems shriek about Russia, China has been robbing America blind

Zoom has now promised to develop the ability to block mainland users from certain meetings.

Two sets of values for 1 company.https://t.co/dRIGvAf15p

China runs a vast scientific and industrial espionage network to steal technology from the USA. The Chinese economy has struggled to transition away from low-value-added manufacturing. Although everything is made in China, high tech components like chips and microprocessors are still usually made elsewhere, with basic assembly occurring in China. The country lags in terms of innovation.

Wang has admitted that he was sent to the USA to learn details of laboratory design at UCSF so the Chinese military could replicate it. Wang also likely faces charges for illegally trying to take research materials out of the US. Wang holds the rank of major and works in a military university lab in China.

Wang’s WeChat record, the popular Chinese alternative to WhatsApp, was wiped before he tried to leave the USA. Wang faces 10 years in prison and a fine of $250,000.