Minneapolis Police have reported that no less than twelve people were shot in a mass shooting that happened in the major Midwestern city early on Sunday morning.

One person was killed and eleven others are receiving medical attention. The incident is one of the most devastating to happen in the city and region in living memory. All of the victims were adults. The eleven surviving casualties suffer injuries of varying severity.

A hundred shot in Minneapolis since Floyd’s death

#Minnesota | One man is dead and 11 people suffered non-life-threatening wounds in a shooting in #Minneapolis. https://t.co/b28lhq4HJu pic.twitter.com/SrZocdVFUQ

A spokesman for the Minneapolis Police Department, John Elder, reported that the shooting occurred shortly after midnight and appears to have involved several weapons. Minneapolis PD did not offer any information on the suspects or their motives, other than noting that no arrests have been made.

Witnesses reported hearing many dozens of shots being fired. The incident occurred in uptown Minneapolis, which has been the site of running protests and riots following the death of George Floyd on Memorial Day. Floyd’s death kicked off the nationwide protests after an officer he had worked with at a night club knelt on his neck for almost 9 minutes. Reports have emerged that Floyd may have had a lethal amount of Fentanyl in his system at the time.

The shooting on Sunday adds to the tally of people shot in Minneapolis since Floyd’s death, which is around a hundred, including over 20 last weekend alone.

The protests and rioting have hampered efforts to open Minneapolis’s uptown commercial district following the coronavirus lockdown. Besides the protests, illegal street racing has caused the police to block off some streets in the neighborhood.

Do residents really want to defund the police? 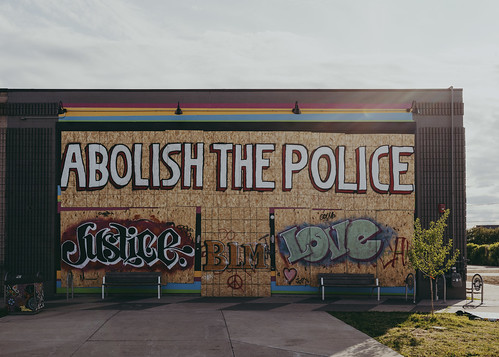 Following Floyd’s death, the Minneapolis city council voted to disband their police department in favor of a community policing model. Already, however, residents have started expressing distress over a perceived lack of police response to the violence engulfing the city. Some suspect the police have put a ‘stand-down order’ into effect, though Minneapolis PD denies such rumors.

It remains to be seen if the city council can stick by its plan to defund the police and move the funding to things like social work and addiction counseling, creating a ‘police-free’ city. The nation’s truck drivers have announced that they will refuse to deliver goods to cities with defunded police departments. The Democratic defunding plan is likely both unworkable and contrary to the desires of most residents.