President Trump’s Twitter account has always gotten under the skin of leftists and other Trump haters. The means of unfiltered communication with supporters is something that Democrats despise, especially in the middle of an increasingly contentious 2020 presidential election.

Right now, several recounts, lawsuits, and ballot tabulations are underway. States like Georgia and Wisconsin are already set to do recounts, due to the notably slim margins of projected Biden wins. 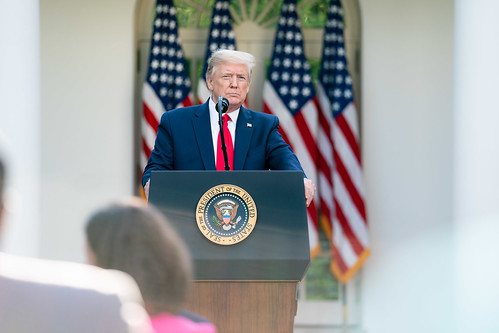 The president’s team and family have used Twitter to get their messages across, as has President Trump himself. Now, Breitbart News confirms that liberal organizations are pushing for Twitter to ban the president’s account altogether.

Common Cause and Lawyers’ Committee for Civil Rights Under Law, both leftist groups, are pushing heavily for the 45th president’s removal from Twitter.

The organizations actually penned a letter to the social media platform, stating that Trump’s presence on and use of Twitter could ultimately “[delegitimize] the integrity” of the election. Likewise, both far-left groups maintain that the president’s tweets could engender violence against “civil servants.”

Twitter is out of control, made possible through the government gift of Section 230!

Lawyers’ Committee for Civil Rights Under Law and Common Cause also noted their concerns that Trump may cause Americans to ask questions about the integrity of elections and voting processes.

Although, to many Americans, asking these types of questions isn’t a negative thing; there are many reports of election fraud, ballot harvesting, and other acts that indicate cheating as votes are counted.

The aforementioned liberal activist groups are not the first ones to call for Trump’s removal from Twitter. During the 2020 primary election, Kamala Harris actually urged Twitter to suspend Trump’s account, a request that the platform declined to fulfill.

Thus far, the 45th president’s account on Twitter remains very much active; however, this has not stopped the site from repeatedly slapping warning labels on his posts, videos, and retweets. Some Americans have suggested that this, too, constitutes a form of censorship.

Amid reported instances of online platforms censoring conservatives, talks about the removal of Section 230 has come up. Conservatives in leadership positions remain the driving forces behind the work to end big tech censorship of conservative users and viewpoints.

Do you think Twitter will suspend President Trump’s account? Do you support the removal of Section 230 or do you think it should remain as is? Let us know in the comments section below!