Former top FBI lawyer Kevin Clinesmith, 38, today pleaded guilty to modify a document that he used to obtain a classified FISA application and to justify spying on an individual working for the Trump campaign.

“Clinesmith pleaded guilty to one count of making a false statement within both the jurisdiction of the executive branch and judicial branch of the U.S. government, an offense that carries a maximum term of imprisonment of five years and a fine of up to $250,000,” according to a Department of Justice press release. Clinesmith will be sentenced on December 10, 2020.

Clinesmith worked full-time at the FBI as Assistant General Counsel in the FBI’s Office of General Counsel’s National Security and Cyber Law Branch from 12 July 2015 to 21 September 2019. James Comey was FBI director at the time.

Don’t let anyone tell you that Kevin Clinesmith was a low ranking official at the FBI.

By falsifying evidence, he opened the door for the FBI to spy on an American citizen. pic.twitter.com/d6H9ywXcOz

Roger Stone got 4 years for no reason.

Clinesmith weaponized the FBI’s power in order to fabricate evidence and frame an innocent man.

On 31 July 2016 the FBI launched its Crossfire Hurricane operation. The operation was designed to determine “whether individuals associated with the Donald J. Trump for President Campaign were coordinating activities with the Russian government,” said the DOJ. “By August 16, 2016, the FBI had opened cases under the Crossfire Hurricane umbrella on four individuals, including an individual identified in this case as ‘Individual #1.'”

Individual 1 is reportedly then-Trump campaign assistant Carter Page, and, according to The New York Times, the other Government Agency (OGA) that he sometimes assisted is the CIA.

It was the role of FBI attorney Clinesmith to verify information and give legal advice to FBI officials who served in Crossfire Hurricane and were securing warrants from the classified Foreign Intelligence Surveillance Act (FISA) court to spy on citizens. Clinesmith was instrumental in preparing the FISA applications.

In August 2016, “prior to the approval of the first FISA application,” The OGA (presumably the CIA) sent a report to Crossfire Hurricane leaders claiming that Carter Page was a ‘operational contact’ working for them between 2008 and 2013.

Furthermore, “prior to the submission of the fourth FISA application, and after Individual #1 claimed publicly that he/she had supported the U.S. government in the past, an FBI Supervisory Special Agent (“SSA”) requested Clinesmith to check with the OGA as to whether Individual #1 had ever been a ‘source’ for the OGA,” the DOJ said.

Attempted Takedown of Trump involved the FBI and CIA 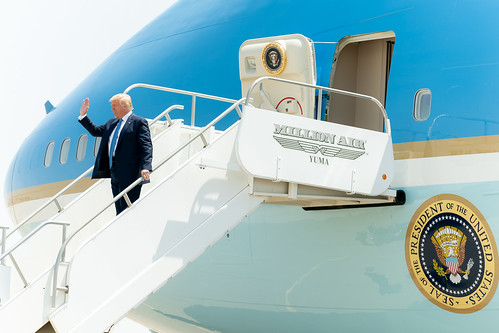 “President Trump in Arizona” (Public Domain) by The White House

FBI lawyer Clinesmith subsequently asked the OGA on June 15, 2017 whether Carter Page was ever a source for them. On the same day, an official at the OGA (CIA) emailed Clinesmith with a list of documents that cited the Crossfire Hurricane team’s Memorandum of 17 August 2016. The OGA official also wrote the following in his email to Clinesmith,

“the [digraph] to show that the encrypted individual is a [U.S. person]. We encrypt the [U.S. persons] when they provide reporting to us. My recollection is that [Individual # 1] was or is … [digraph] but the [documents] will explain the details. If you need a formal definition for the FISA, please let me know and we’ll work up some language and get it cleared for use.”

Despite that information, FBI Counsel Kevin Clinesmith, “from his office in the Hoover Building, forwarded the OGA Liaison’s June 15, 2017 email to the SSA with alterations that the defendant [Clinesmith] had made” so that the OGA Liaison’s email read as follows,

“My recollection is that [Individual # 1] was or is ‘[digraph]’ and not a ‘source’ but the [documents] will explain the details. If you need a formal definition for the FISA, please let me know and we’ll work up some language and get it cleared for use.”

Clinesmith’s alterations made it appear that the OGA had said that Individual #1 was “not a source,” which was not true.