For quite some time now, Americans have speculated that Joe Biden is not truly in charge of the 2020 Democrat ticket, despite him being (on paper) the official head. Both Biden and his running mate, Sen. Kamala Harris, have repeatedly spoken about a “Harris-Biden administration.” 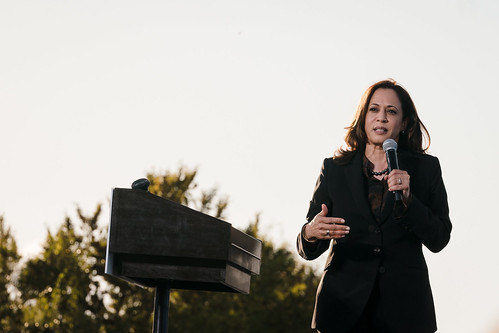 Yesterday, while campaigning in Atlanta, Georgia, Biden made statements that furthermore support the assertion that Kamala Harris is really in charge, despite her being the vice-presidential candidate on paper.

Washington Examiner reports that Biden introduced himself as Harris’ running mate, rather than the other way around.

Unlike numerous previous instances, yesterday’s remarks from Biden cannot be chalked up to a gaffe.

The former vice president very clearly took the stage and announced himself as “Jill Biden’s husband” and “Kamala’s running mate.” Biden wasn’t out of it either when he asserted that Harris is the true leader of the Democrat ticket; in fact, the former vice president followed up by noting that he’s not joking about his position as “Kamala’s running mate.”

Joe Biden confirms what we all knew:

“KAMALA” sign is prominently displayed behind him ⬇️ 👀 pic.twitter.com/Ubu4FhaFNH

Harris, of course, has yet to publically respond to the assertion that she is the true leader of the Democrat ticket.

Nonetheless, this is something that numerous conservatives and Republicans have pointed out all along; to many Americans within the right-wing, Biden’s outright admission of being “Kamala’s running mate” is just a confirmation of what was already known.

As of now, there are six days left before the 2020 presidential election officially runs its course.

Amid Biden’s admission that he is “Kamala’s running mate,” he’s still taking hits from the Trump campaign. On numerous occasions throughout his nearly 50-year political career, Biden has lied and misrepresented information about himself to the American people.

Joe Biden will lie about anything and everything. pic.twitter.com/kYI4zRTOyv

In a new ad, the Trump campaign holds Biden’s feet to the fire, showing a series of Biden’s lies in a one-minute clip. Finally, the ad concludes by making the case for why Biden cannot and must not be elected as the next president of the United States.

What do you make of Joe Biden clearly and openly stating that he’s Kamala Harris’ running mate? We look forward to learning your thoughts in the comments section below!