The protests and riots that have plagued America after the death of George Floyd have been fueled and exploited by political interests.

According to The Gateway Pundit, the riots, focused in Democrat-run cities across America, were orchestrated by three broad groups, domestic Islamist organizations, domestic terrorists, and groups like BLM closely related to the Democrat Party.

The rioters’ narrative makes no sense

The death of one man at police hands is tragic, no matter the character, criminal history, and blood fentanyl level of the victim in question. It should never have happened, good people have lost a loved one, however flawed. However, saying that the riots and protests are out of proportion to that tragedy is an epic understatement. Violent crime has shot up, with ‘protesters’ responsible for many dozens of new deaths, including those of numerous children. How are those deaths less protest worthy? The destruction of millions of dollars worth of property belonging to parties that have less than nothing to do with police violence is also disproportionate, to say the least. Where did the pallets of bricks at key sites of rioting come from? Why do Democratic lawmakers ban public gatherings other than often violent protests?

Funding for BLM has been funneled through ActBlue to various Democratic Party interests. Part of this funding has been from foreign sources, breaking party finance rules.

One intermediary funding channel between BLM and the Dems, Thousand Currents has Susan Rosenberg on its board. Rosenberg was a member of the Weather Underground terrorist group along with close Obama Associate Bill Ayers. On his last day in office, Obama gave Rosenberg a pardon for a 1981 Brinks robbery that left three dead.

Three-digit payments made to random individuals for no discernible reason 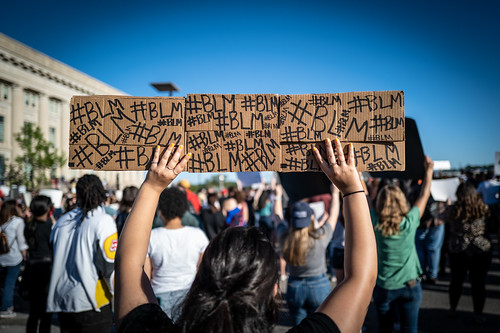 Thousand Currents is closely tied to Democratic Party funding hub ActBlue. A new review of the Texas arm of ActBlue’s funding flows, made possible by TransparencyUSA.org, shows thousands of mysterious payments to random individuals. In total, the payments amount to nearly $10 million. Individual payments average around $275. It is not clear what services have been rendered in exchange.

Given the shady financial ties between BLM and the Dems, and the evidence of the closely-aligned Open Society Foundation paying rioters, some on the right, like Judicial Watch and The Gateway Pundit, strongly suspect that the Texas ActBlue payments are directly funding professional rioters. With economic upheaval the best way to unseat an incumbent president, Democrats are clinging to their economically suffocating pandemic lockdowns, with a conspicuous exception made for anarchic rioters.