During his speech at the Republican National Convention on Tuesday night, Republican Kentucky Attorney General Daniel Cameron announced his support for President Donald Trump and condemned “politics of identity, cancellation, and mob rule.”

Cameron started by condemning rioters who don’t believe in “the better angels of our shared American history” and show it by targeting “statues of people like Ulysses S. Grant, Frederick Douglass, and even [Abraham] Lincoln himself.”

“But even as anarchists mindlessly tear up American cities while attacking police and innocent bystanders, we Republicans do recognize those who work in good faith towards peace, justice, and equality,” he said. He then declared that Republicans “will never turn a blind eye to unjust acts” or “accept an all-out assault on Western civilization.”

Good evening, my name is Daniel Cameron. I am 34 years old and the first African American attorney general in Kentucky history. It is an honor to be with you as a proud Republican and supporter of @realDonaldTrump

“You can’t tell me how to vote because of the color of my skin,” Kentucky Attorney General Daniel Cameron says to Joe Biden, who claimed that “you ain’t black” if you support Trump.

“My mind is my own,” Cameron says. pic.twitter.com/QlDUiYccmB

Cameron emphasized that Democrats want to “go backward, to a time when people were treated like political commodities who can’t be trusted to think for themselves.” He said, in contrast, Republicans give people “the best chance to meet those universal desires” of work, law and order, and the chance to “make a good life for yourself and your family.”

“I think often about my ancestors who struggled for freedom,” he said. “And as I think of those giants and their broad shoulders, I also think about Joe Biden, who says ‘if you aren’t voting for me, you ain’t black,’ who argued that Republicans would put us ‘back in chains,’ who says there is no diversity of thought in the black community.”

“Mr. Vice president, look at me,” Cameron declared. “I am black. We are not all the same, sir. I’m not in chains. My mind is my own. And you can’t tell me how to vote because of the color of my skin.”

“Joe Biden is a backwards thinker in a world that is craving forward-looking leadership,” said Cameron. “There’s no wisdom in his record or plan, just a trail of discredited ideas and offensive statements. Joe Biden would destroy jobs, raise our taxes, and throw away the lives of countless unborn children.”

Cameron stressed that Biden is “captive to the radical left, a movement committed to cancel culture and the destruction of public discourse.” 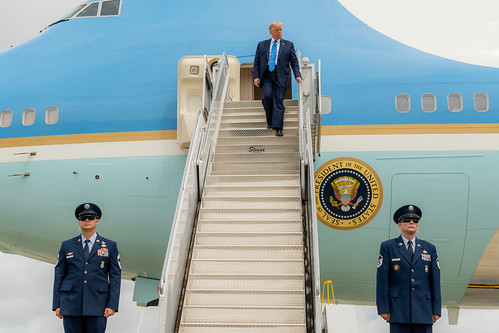 Dems terrified of blacks who think for themselves

“They believe your skin color must dictate your politics,” he added. “If you fail to conform while exercising your God-given right to speak and think freely, they will cut you down. The politics of identity, cancellation, and mob rule are not acceptable to me, and Republicans trust you to think for yourselves and to pursue your American dream; however you see fit.”

Cameron then outlined a list of Trump’s successes on the reform of criminal justice, the economy, and his commitment to help American workers.

“That’s my Republican Party, the Party of Lincoln, that believes America is an indispensable nation, an evergreen tree, standing tall in a turbulent world,” he concluded. “And that’s why I am voting for Donald Trump for president.”