More Dem Party moral hypocrisy. No less than 94 of the Biden campaign’s field organizers have signed a letter addressed to the Florida Democratic Party accusing the campaign of mistreating staff and “suppressing the Hispanic vote” in Florida.

The letter has been published by the Miami Herald. It accuses that the Biden campaign of mistreating its field organizers. It has also forced organizers to relocate against their wishes. Specifically, a group of Puerto Rican organizers were unexpectedly told to relocate to a different part of the state.

The #Biden campaign in #Florida has been accused of having a poorly organized #Latino GOTV plan. 90+ #Democrat field organizers have slammed “mistreatment of field organizers, relocating trained staff members without explanation, lack of organizing resources….

According to an internal letter Biden's campaign is 'suppressing the Hispanic votes' in central Florida. The field organizers say that there is a lack of a "fully actionable field plan." where as there is a tremendous enthusiasm of voting among Latinos and others in the…

The letter reads that the Biden campaign, “is suppressing the Hispanic vote by removing Spanish-speaking organizers from Central Florida without explanation, which fails to confront a system of white-dominated politics we are supposed to be working against as organizers of a progressive party.”

The signatories continue, accusing the Biden campaign of lacking a “fully actionable field plan” and maintaining a “toxic” work culture. The organizers are demanding an apology from campaign officials and demanding to be sent back to the part of the state they originally worked in.

Jackie Lee, the director of the Biden campaign in Florida, told journalists that no staff members have been asked to move over the last six weeks. Lee emphasized that “we look forward to working with organizers to address their concerns.”

Lee said, “We are consulting with IBEW Local 824 leadership on the structure of our organizing program, including many of the issues that were raised in this letter and proposed solutions. We look forward to discussing them with organizers and getting their feedback as soon as able.”

“The stakes of this election are critical, and we are committed to working with our organizers and Florida Democrats at every level in order to build a strong, successful coordinated campaign,” she continued.

Florida is, as usual, a key battleground state.

Biden is under-performing with Latino voters 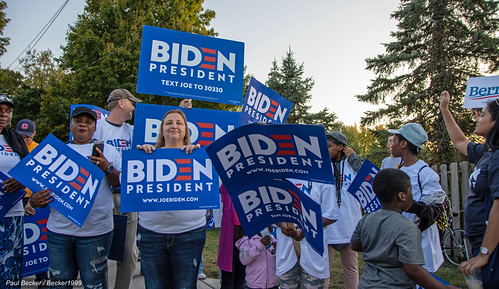 President Trump has been closing the gap in poll numbers with Biden recently, with Rasmussen, one of the nation’s most historically accurate polling organizations, cutting Biden’s lead to 3 points over the last couple of weeks.

Some polls suggest that Biden is ahead in some voting districts that were solidly pro-Trump in 2016. However, Biden is performing worse among Latinos than Hillary Clinton did four years ago.

Pandering to the protesters and rioters who are running amok across the nation may be a huge misstep. Polls show that most black and Hispanic Americans support the police, while the most persistent outbursts take place in some of the nation’s whitest cities, like Portland and Seattle.