An attempt to take down President Trump’s Saturday rally in Tulsa with a lawsuit has failed. The lawsuit to force the rally to observe social distancing and other public health precautions which are not enforced in Oklahoma was rejected by an Oklahoma judge.

Over a million Americans have applied to join the Trump rally, a number slightly higher than the population of the Tulsa Metropolitan Area. As such, the rally will likely be moved from the enclosed 19,000-seat BOK Center in downtown Tulsa to an open-air venue.

https://t.co/I88ycoWUlZ
I'm wondering why these attorneys haven't filed any lawsuits to force rioters and BLM protesters to wear face masks? Maybe he is just worried about Trump supporters???

Plaintiffs claim to be acting for the citizens of Tulsa

C’mon now…do they really expect us to believe they’d file a lawsuit to try to stop ⁦@JoeBiden⁩ from meeting 9 people at a local Starbucks? 🙄 https://t.co/9hJ7fPSzGD

The lawsuit was pushed by two lawyers who claimed to be acting on behalf of the citizens and business owners of Tulsa. On Tuesday, judge Rebecca Nightingale threw out their request for a temporary injunction against the company managing BOK Center. The lawsuit was likely hopeless even if it was not thrown out as the Trump campaign is now looking for a venue with 50 times the capacity.

The lawsuit was predicated on Oklahoma’s public nuisance laws. The plaintiffs claimed that they wanted to guarantee that the rally would employ what they called “mandatory use of face masks and social distancing rules for all guests and employees, as recommended by the state, local and federal authorities, and by every credible and qualified medical expert who has studied the issue.” For a pair of lawyers, they seem weak on legal terminology, as ‘mandatory’ and ‘recommended’ don’t mean the same thing. 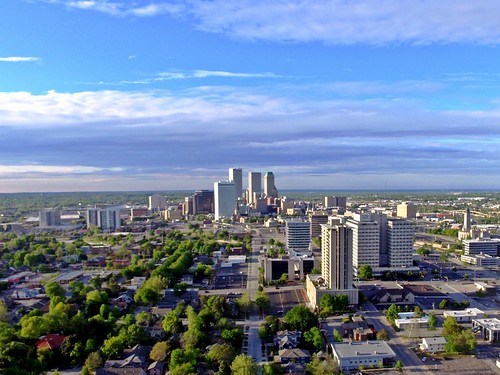 “Looking North on Downtown Tulsa, Oklahom” (CC BY 2.0) by JustTulsa

The two lawyers claimed to have no political motivation and argued in their lawsuit that “as currently planned, the event will endanger not only the health of the guests in attendance and the plaintiffs, but the entire Tulsa community and any community to which the guests may afterward travel . . . If ASM Global moves forward with the event without adequate review, planning, training, protective equipment and safeguards, cases of COVID-19 – and the unavoidable attendant deaths – will rise. Oklahoma’s already strained health care infrastructure will be pushed past the breaking point by the certain spike in COVID-19 presentment at local hospitals.”

Oklahoma Governor Kevin Stitt has noted that the state’s medical system is not currently under strain. American and medical officials have recently announced that the COVID-19 death rate is far lower than predicted and that it is rare for asymptomatic carriers to pass on the virus.

In light of these facts, the Trump campaign planned measures of giving all participants temperature checks and face masks are perfectly adequate.