“President Trump in Louisiana” (Public Domain) by The White House

Earlier this week, CNN finally condemned the fiery but mostly peaceful riots. The arson, looting, and murders in the streets were all fun for the whole family, but now Don Lemon is worried that the violence “showing up in the polling. It’s showing up in the focus groups. It is the only thing right now that is sticking.”

A strong argument can be made that CNN has done a lot to legitimize this social unrest, including Don Lemon himself. It is also worth pointing out how rioting became objectionable only once it threatened to hurt the Democrats and not, say, the owners of small businesses or anyone living in the cities concerned. But let’s indulge Don Lemon for a second, for he is absolutely right. Black Lives Matter has turned into the Democratic brand’s electoral liability.

Biden and the media have been ignoring the ongoing BLM riots for MONTHS until their focus groups and polls started showing they were reflecting very poorly on the democrats.

Then like Mockingbirds, they all started singing the same tune today, BLAMING TRUMP! 😂

Trump crushing it in the polls with visible minorities

A new Hill-HarrisX poll conducted August 22-25 (during Kenosha’s most intense rioting) finds that President Trump’s approval among black voters now stands at 24 percent. That’s an amazing 9 point jump since a mere two weeks when the same poll was held. Support among Hispanics also increased from 30 percent to 32 percent. In the absence of better explanations (maybe black voters just love the convention?), it seems possible that the rioting drives the voters right, particularly those in the most affected urban communities.

Other polling substantiates the statement. On Wednesday, Marquette Law School published a survey which asked Wisconsin residents a series of questions about BLM and the protests.  The results should be enough to send chills down the spine of any Democrat. In June, respondents approved the protests with a margin of 25 points; in August, that fell to a margin of 0, with approval of 48 percent and disapproval of 48 percent. The idea of defunding the police, already highly unpopular with a margin of -47 in June, dropped further in August to a margin of -61; no less than 78 percent of voters are against it.

Police nationwide are rising in popularity 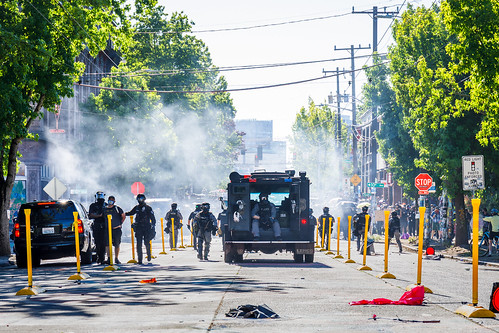 Policing has become more popular, growing from 54 to 63 net approval. Notably, the biggest rise in support came among black and Hispanic respondents, who now have an overall favorable view of the police. In June, BLM’s impressive net approval rating of 32 percent eroded to just 12 points. If that sinks any more, Democrats will really start to regret their election messaging choices.

You can remember that Democratic pollster David Shor had predicted this would happen back in late May and was promptly fired for it. He had tweeted analysis by a black professor who found that race riots had actually tipped the 1968 general election for Nixon, with the apparent implication that the same thing could happen in 2020. History really does repeat itself.