On Saturday night, July 4th, 8-year-old Secoriea Turner was killed when a mob opened fire on the car that she was in. The incident took place across the street from the burned-out Atlanta Wendy’s where Rayshard Brooks was killed last month. The location has become a squat for demonstrators and the site of a memorial to Brooks.

Atlanta Mayor Keisha Lance Bottoms has tried and failed to clear the burned-out Wendy’s of demonstrators, and, although Secoriea Turner’s murderers remain unidentified, Bottoms has insinuated that the demonstrators are at least partly culpable.

“You shot and killed a baby,” she said at a news conference. “Enough is enough.” Bottoms indicated that the location would now be forcibly cleared, saying “At the point that an 8-year-old baby is killed, the discussions have ended.”

JUST IN: We just got these photos of 8-year-old Secoriea Turner, who was killed last night near the Wendy's where Rayshard Brooks died: https://t.co/U2niKwoxXF pic.twitter.com/GI9zpSlbLl

Murdered child’s parents spoke at a press conference on Sunday

These are the parents of the 8-year-old girl who was killed last night in Atlanta. Her name was Secoriea Turner. https://t.co/ZeIbobcrkY pic.twitter.com/rt2hpln65V

Secoriea Turner’s parents also spoke at the Sunday press conference alongside Mayor Bottoms. The bereaved couple added their own criticism to the BLM movement.

Her mother continued, “They didn’t give us time to make a U-turn, they started shooting at my car before we could even make a U-turn. Shooting my tires out, like why?”

“My baby was shot,” the mother said, her trauma and exhaustion clearly visible. 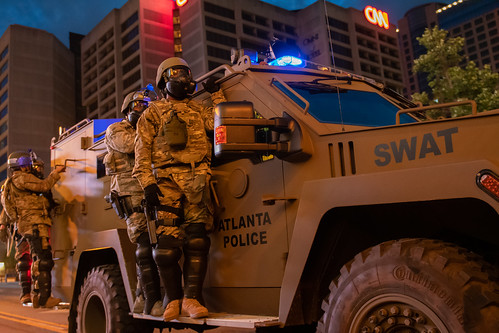 “We’ve talk a lot about what we are demanding from our officers in our communities. We’ve protested, we’ve demonstrated, we’ve been angry, we’ve cried, we’ve demanded action. We’ll now we’re demanding action for Secoriea Turner and for all of the other people who were shot in Atlanta last night and over the past few weeks because the reality is this – these aren’t police officers shooting people on the streets of Atlanta, these are members of the community shooting each other, and in this case, it is the worst possible outcome.”

“You can’t blame this on a police officer, you can’t say this is about criminal justice reform. This is about some people carrying some weapons who shot up a car with an eight-year-old baby in the car,” Bottoms later added. “We got to stop this. We are doing each other more harm than any police officer on this force. We’ve had over 75 shootings in the city over the past several weeks.”

The mayor has asked anyone with information on the perpetrators to step forward.