Court documents on pedophile and sex trafficker Jeffrey Epstein and his madam Ghislaine Maxwell have been released. The documents cover the testimony of Virginia Giuffre, one of Epstein and Maxwell’s many accusers and alleged victims. In the documents, Giuffre says that she had seen Bill Clinton partying on Epstein’s private island with two underage girls from New York.

There is now definitive truth that Bill Clinton visited Jeffrey Epstein’s pedophile island with two young girls.
This is why Ghislaine was protected for so long. The courts and the media were protecting @BillClinton.

Bill Clinton is Named in the Jeffrey Epstein Files.https://t.co/IguUoClj3W

The document records Guiffre getting questioned by lawyer Jack Scarola, and included the exachange, “Do you have any recollection of Jeffrey Epstein’s specifically telling you that ‘Bill Clinton owes me favors?’”

“Yes, I do,” Guiffre answered. “It was a laugh though. He would laugh it off. You know, I remember asking Jeffrey what’s Bill Clinton doing here [on Epstein’s island] kind of thing, and he laughed it off and said well he owes me favors. He never told me what favors they were, I never knew. I didn’t know if he was serious. It was just a joke… He told me a long time ago that everyone owes him favors. They’re all in each other’s pockets.”

Scarola also asked if Giuffre was ever on the island with both Epstein and Clinton.

Giuffre replied, “Ghislane, Emmy [another alleged victim], and there was 2 young girls that I could identify. I never really knew them well anyways. It was just 2 girls from New York.” 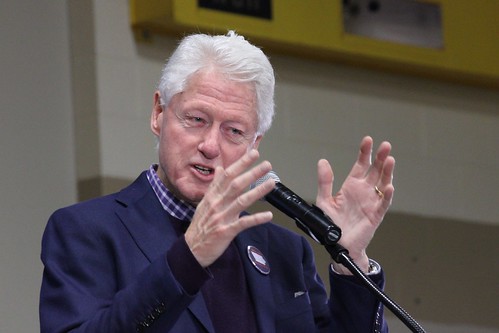 In a 2002 article in New York magazine, Donald Trump described Epstein’s taste for girls “on the younger side.” In the same article, Clinton praised Epstein.

The Clinton Foundation released a statement last year claiming that Clinton “knows nothing about the terrible crimes Jeffrey Epstein pleaded guilty to . . . Clinton took a total of four trips on Jeffrey Epstein’s airplane.” Records show this to be untrue.

The statement went on, “Staff, supporters of the Foundation, and his Secret Service detail traveled on every trip.” Records also show this to be untrue. The statement continues, “He’s not spoken to Epstein in well over a decade, and has never been to Little St. James Island, Epstein’s ranch in New Mexico, or his residence in Florida.” This contradicts the documents released this week.