Congressional races play a pivotal role in the 2020 presidential election. Right now, the fates of the House of Representatives and Senate remain up for grabs.

Republicans seek to regain control of the House and ensure that the Senate remains under GOP control; meanwhile, the Democrat Party aims to keep power in the House and infiltrate the Senate with a new liberal majority. 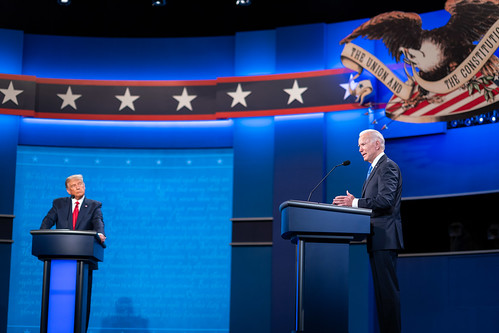 At this time, the GOP is confident that Republicans have a chance in winning back the House. This is a top goal for current House GOP members who want Nancy Pelosi ousted from her position as Speaker.

Pelosi, on the other hand, doesn’t believe that Republicans have a snowball’s chance in winning back the House, reports Breitbart News.

Taking Back the House of Representatives

Republicans who aim to take back the House are urging the American people to get out and vote for GOP members on the ballot.

House Minority Leader Kevin McCarthy is a Republican who believes that his party does have a shot to boot out Speaker Pelosi once and for all. The Democrat Speaker of the House also continues to take heat for her manner of leadership, all-or-nothing approaches to negotiations, focus on impeachment, etc.

Pelosi, however, told a very different story while speaking with CNN host Jake Tapper. Earlier this morning, Tapper played a clip of Trump speaking at the final presidential debate; in the segment, the president professed that Republicans will “win back the House” come November.

When Tapper asked Pelosi’s thoughts, she laughed, dismissing the 45th president as “delusional.” The House Speaker then sarcastically encouraged Trump to “keep on thinking” that Republicans will win back the House before criticizing his statements on COVID-19 and the nation’s climate.

What Happens if Democrats Keep the House?

There is a deal to be made, but Speaker Pelosi's all-or-nothing approach continues to be the reason why American families and workers aren't getting the aid they need.

It's past time for Speaker Pelosi to put the country before her far-left agenda.

Finally, Americans witnessed Pelosi rail against the nomination of Supreme Court nominee Amy Coney Barrett. The Senate is set to move forward with a confirmation vote tomorrow; this vote is one that Democrats continue to rail against, yet ultimately have no power to stop.

Do you believe the Republican Party will take back the House of Representatives? Will the GOP manage to keep the Senate? We want to know what you think will happen down below in the comments section.