During the remainder of this week, U.S. Vice President Mike Pence will take a significantly greater role in the re-election of President Trump. Tomorrow night, Pence is also set to go against Kamala Harris in 2020’s first and only vice-presidential debate. 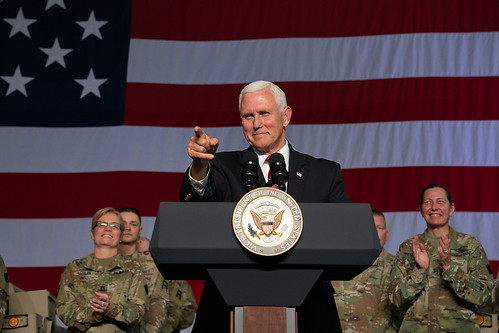 During this period, both vice-presidential candidates will stand a total of 13 feet apart from one another; moreover, plexiglass between Pence and Harris is being set up as a precaution against coronavirus transmission.

After tomorrow’s debate against Harris, the vice president will travel across the nation to continue campaigning on behalf of President Trump, according to new developments from Breitbart News.

On Thursday, the vice president will spend time in Arizona and Nevada to host rallies on behalf of the Trump campaign.

During these rallies, Pence will talk about the Trump administration, improvements made over the past 3.5 years, and how re-electing the president for a second term in office will allow for continued U.S. prosperity.

“The stakes in this election have never been higher. The choice has never been clearer. I look forward to the opportunity to take our case to the American people and four more years of President Donald Trump in the White House.” –@Mike_Pence pic.twitter.com/wrqgwzUuNM

While speaking to reporters yesterday, the vice president confirmed that he’s eager to take on a more active role in campaigning for Trump’s re-election. Pence noted the intensity of 2020’s election stakes, explaining that four more years of the president in office is absolutely imperative.

Yesterday night, the vice president arrived in Utah for tomorrow’s debate against Harris. Upon his arrival, Pence was greeted with pro-Trump and MAGA flags. This marks yet another instance of unparalleled enthusiasm which presently surrounds the Trump campaign.

When Will Trump Return to Campaign Trails?

At this time, President Trump is back in the White House and expected to remain in quarantine for the rest of the week. Sean Conley, a White House doctor, maintains that if Trump’s health stays the same or even improves between this point and Monday, everyone can breathe a “final sigh of relief.”

I am looking forward to the debate on the evening of Thursday, October 15th in Miami. It will be great!

While the president takes a temporary pause from the campaign trails to recover from coronavirus, he’s not totally out of the game. Trump confirmed that he will, in fact, be present at October 15’s second presidential debate against Joe Biden.

Are you looking forward to seeing more of the vice president on the campaign trails? What do you think the Pence vs. Harris debate will be like tomorrow night? We want to get your thoughts and predictions down below in the comments section!