According to Rasmussen’s White House Watch survey, President Trump has narrowed Biden’s lead in the polls from ten points to three in just one week.

It’s higher! There are many black Americans that won’t go on record about their support for @realDonaldTrump due to the backlash of #CancelCulture and fear of being cancelled by peers… Add 10% to those numbers. #Keep45 #ReElect45 #MAGA2020 #KAG2020TRUMPVICTORY

Rasmussen polls have one of the best track records

"A week ago, Biden had a 12-point lead among independents." Not anymore …. https://t.co/aRvkZoXxPT

In the current Rasmussen White House Watch survey, Trump got 79% of the Republican vote while Biden got the support of 76% of Democrats. Biden led among Independent voters with 44% while Trump garnered 38% support from them. That also represents a drop in the spread from twelve to eight points.

Back in 2016, Rasmussen Reports offered the second most accurate polls among 11 major polling organizations covering the presidential election. IBD/TIPP Tracking was the most accurate and the only one that predicted a Trump win. Rasmussen predicted that Hillary Clinton would win with a mere 1.7% of the popular vote. In reality, she won by 2%.

Tim Malloy, a polling analyst at Quinnipiac University has said, “there’s still 16 weeks until Election Day, but this is a very unpleasant real time look at what the future could be for President Trump. There is no upside, no silver lining, no encouraging trend hidden somewhere in this survey for the president.”

Don’t put too much faith in the polls 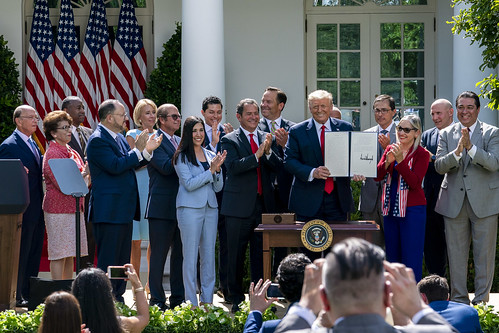 Fox News supports this analysis, saying, “An average of the latest national polls in the 2020 presidential race compiled by Real Clear Politics indicates Biden with an 8.1 point lead over Trump. More importantly, Biden enjoys single digit advantages over the president in an average of the most recent polls in many of the key battleground states where the general election will be won.”

1988 Democratic presidential candidate Michael Dukakis knows how wrong the polls can be, losing to Bush Sr. after enjoying a 17-point lead. Dukakis told reporters this week that polls, “Particularly this year, should be studied cautiously. Biden can and should win, but being at 50, no matter how weak your opponent is, is no guarantee of success.”