The CHOP, an anarchist squat in Seattle has finally been shut down by police. What the Democratic mayor called a potential summer of love rapidly disintegrated into a hellscape where the crime rate rose by over 500% and emergency response teams were unable to access crime scenes or accidents. Hundreds of local businesses have been affected and will struggle to return to normal. One local business, Car Tender, was the target of an attempted arson attack. The owner’s son, Mason McDermott, gave an interview to local news on what it’s like to have his family’s lives affected in this way.

Father of 19-year-old killed in CHOP says he got condolence call from President Trump, but not Seattle's mayor. https://t.co/sN5I6bIWFT

McDermott said, “It’s good to see that something is being done, 20 days too late, but good to see that they’re starting to make somewhat of an effort to resolve the issue that we’re having here.”
McDermott has joined a major class-action lawsuit against the city authorities over their failure to provide the services and security for which business owners and residents pay taxes.

When asked if he thinks the lawsuit pushed the authorities to shut down the CHOP, he said, “Personally, I don’t. I would say some other things may have moved or urged her to do what is being done today … You know, we’re here every night, and we have our security guys here every night, and I’ve been here quite a bit. The shootings almost appear every night, and people are losing their lives for what reason? It’s very sad.”

McDermott hopes that the class-action lawsuit will make an example of the local authorities and their dereliction of duty. “This is a true show of colors of those people that we have elected to be in our city offices … hopefully it opens people’s eyes enough,” he said.

CHOP shut down only when city officials were directly affected 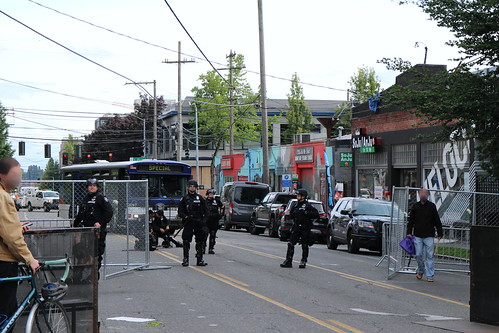 McDermott underlined the only reason that local authorities finally moved to shut down the violent anarchist occupation. “Nothing was done about this until it directly affected the people who were our elected officials. Until they showed up at their front doors, it was the summer of love, and then, ‘Oh look, it is violent. Oh look, it is kind of scary.’”

All Americans should have their rights to life and property protected. Taxpayers, like anyone else spending money on a service, have a right to get what they paid for, including law and order.