On Saturday, two Los Angeles police officers were shot while on duty, for absolutely no reason and with no provocation. Videos have shown the officers sitting in a patrol car when an individual walked up to them, pulled his weapon, and opened fire.

This video shows 2 police in Compton being ambushed and shot while they sat in their car. BLM activists then blocked the ambulance entrance of the Hospital ER shouting "We hope they die".

If you’re an undecided voter, I hope you just made your decision. pic.twitter.com/esBaaK3qsJ

This weekend’s incident has led to new conversations about poor leadership in cities that are run by Democrats. President Trump discussed this matter earlier today while interviewing with Fox & Friends, according to Fox News.

During President’s Trump remarks with Fox & Friends, he explained that the Democrats’ “weak and soft” stances on crime are putting communities in at grave risk. The president also stated that the nation needs to become much “tougher” when it comes to stopping, penalizing, and weeding out criminal activity. 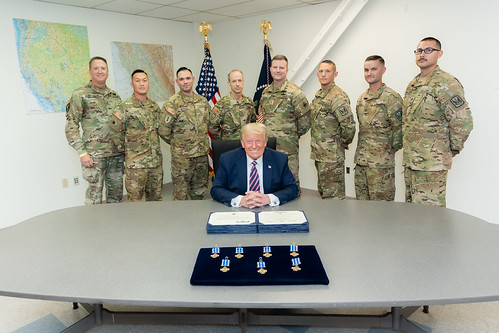 “President Trump in California” (Public Domain) by The White House

Trump then slammed policies of the Democrat Party, stating that the left has denigrated, fired, and “taken respect away” from law enforcement. The president later made sure to point out that communities, such as New York City, which have chosen to defund their local police departments are seeing crime rates spike through the roof. This is not a coincidence, by any means.

Meanwhile, police and law enforcement associations across the nation continue to come out and endorse President Trump for a second term in office.

Congressional Conservatives on Law and Order

Republicans in Washington are putting forth various plans to restore law and order to the many communities that desperately need it.

Yesterday, House Minority Leader Kevin McCarthy (R) released a series of initiatives that conservative Congress members will focus on. These measures include the restoration of American jobs, ending the U.S.’ reliance upon China, resisting the defunding of the police, and more.

Republicans helped build the greatest economy in a generation and the American way of life was thriving. We will do it again. This is our #CommitmentToAmerica. https://t.co/jrAiqLBTJO

While discussing these initiatives, McCarthy noted how they contrast with what the Democrats have in store for Americans. Thus far, not a single Democrat has come forward to condemn the shooting of the two Los Angeles police officers this past weekend.

What do you think about President Trump’s position on law and order? Are you pleased with the conservative intiatives put forward by Leader McCarthy? Let us know down below in the comments section!