Democrats have resisted President Trump’s immigration policies, tooth-and-nail, since his arrival in the White House.

Without merit, the left-wing continues to maintain that policies such as building a border wall and upholding legal immigration are evil and xenophobic. 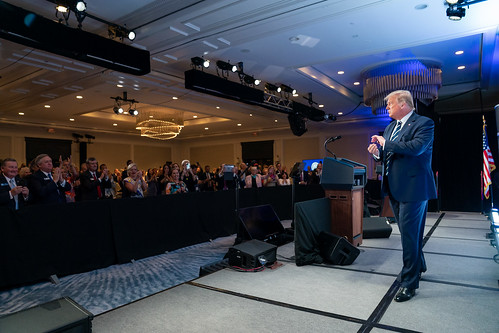 Moreover, the Democrat Party consistently conflates legal immigration and illegal immigration; if the left had their way, America would become an open borders nation and unlawfully entering the United States would cease to be a crime.

Despite the partisan pushback, the president remains committed to law and order. He’s also not backing down on immigration reform whatsoever. As of this Monday, the Supreme Court informed Americans that the body will review critical cases regarding the president’s immigration policies, per Fox News.

Everything You Need to Know

The border wall between the United States and Mexico is one matter which the Supreme Court will review, as is the “Remain in Mexico” reform.

Right now, President Trump is being challenged in his moves to use $2.5 billion dollars in funding for the military to continue building the border wall. It’s also worth noting that more than 400 miles of border wall is already done; this is a matter which the mainstream media rarely covers.

The president’s interest in using military funding for further border wall construction arrives in the face of a federal emergency. At this time, drugs and illegal immigrants are pouring across the border, neither of which is conducive to the well-being of America.

Whether or not the Supreme Court rules in President Trump’s favor will make a significant difference. News that the body will hear cases regarding the president’s immigration policies arrives with 15 days left until November 3.

A Busy Week of Campaigning

While the Supreme Court prepares to review Trump’s immigration reform plans, the president and his team are hard at work on the campaign trails this week.

Trump and Pence will each hold two separate rallies in different parts of the country today. Ivanka Trump, Donald Trump Jr., and Eric Trump are also set to travel the nation this week and campaign on behalf of their father.

Not calling “a lid” – here is #TeamTrumps travel schedule over the next 48 hours! #WorkEthic

On Thursday, President Trump will then travel to Nashville, Tennessee for his final presidential debate against Democrat rival Joe Biden. In stark contrast with President Trump, Biden is absent from the campaign trail and has already called a lid for the next three days.

How do you think the Supreme Court will rule as it pertains to President Trump’s immigration policies? Let us know down below in the comments section.