With less than 30 days left until the 2020 presidential election, the various policies of both Trump and Biden are coming under an increasingly intense microscope.

Right now, the nation knows that both Trump and Biden are radically different on reforms. While the president seeks to lower taxes, limit government, and empower Americans to live their lives, Biden seeks to increase taxes, expand government, and control Americans’ lives while referring to this control as “protection.” 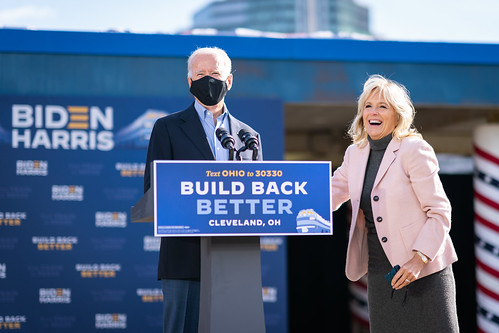 “Cleveland Lakefront Station on The Whist” (CC BY-NC-SA 2.0) by Biden For President

In light of the major economic blows that America has endured due to COVID-19 lockdowns, taxes are a major subject matter. According to Washington Examiner, President Trump is promising even more tax cuts if he’s elected for a second term in office.

Under the Trump administration, workers, businesses, and Americans have seen their taxes decrease. These decreases are extremely well-documented, despite Democrats’ claims that the president’s Tax Cuts and Jobs Act has only benefited top earners and giant corporations.

In addition to the passed Tax Cuts and Jobs Act, President Trump has promised additional middle-income tax reductions if he wins a second term in the White House. This morning, the president also warned that the “BIGGEST [tax increase] IN THE HISTORY OF OUR COUNTRY” will follow if Democrats win the election.

If only all elected officials had this work ethic. @realDonaldTrump is a true warrior. I have admired this unrelenting drive my entire life. pic.twitter.com/oCwwjrUSJ2

Likewise, Trump maintains that Democrats’ tax hikes would drive the economy into the ground (again) and kill jobs across the nation.

What’s Left of the 2020 Presidential Election

With mere weeks before the 2020 presidential election, campaigns and events are still pressing forward.

This Wednesday, Vice President Mike Pence will debate Kamala Harris for 90 minutes. Today, Biden is in Florida trying to pick up as many votes as possible. Several polls on the election have shown Trump and Biden in dead heat with one another, with both candidates statistically tied in many cases.

Day two into it and he’s working hard and looking great. That’s our President. 🇺🇸🇺🇸🇺🇸 pic.twitter.com/CrXesQXF3K

As the president completes his recovery from COVID-19, Mike Pence is taking a more active role in the campaign. Since the vice president tested negative for coronavirus, he can travel to more events, rally with supporters in person, and essentially fill in until President Trump is able to return to the campaign trails.

What do you think about President Trump’s plan to further reduce the American people’s taxes? Are you going to vote for four more years? Be sure to let us know where you stand on the issues and the election down below in the comments section.