Last week President Trump visited Ohio, where he outlined six campaign promises that he will fulfill if he wins re-election in November. The platform focuses on restoring the red-hot economy that the Trump administration had succeeded in building before COVID-19 struck. The platform is also designed to ensure that ordinary working Americans benefit from the economic growth.

More Trump: "If I am victorious in November 3rd, I plan to forgive these taxes and make permanent cuts to the payroll tax.”

The corporate media, mostly owned by plutocratic major-donors to the Democratic Party, has been criticizing Trump for attacking Biden more than selling himself in his campaign. How much the MSM even covers Trump’s new platform remains to be seen.

And all those jobs and our independence from Middle East oil will disappear if #JoeBiden stumbles into the White House on a tsunami of voter fraud. https://t.co/ISqFy9kz5L

This is the issue that has dominated all human life over the last half a year. Trump has promised to have a vaccine ready by New Year. Some consider this impossible, but other countries like Russia have already developed their own, albeit of unknown quality. The president has also advocated the use of hydroxychloroquine. Evidence is increasingly showing the malaria drug to be a cheap and effective treatment for the virus, despite the howls from pharmaceutical giants eager to cash in on a global captive market. Ultimately, defeating the virus is the foundation for Trump’s five subsequent campaign promises.

The Trump Administration set many economic records before the virus hit, and the chances are that they can do it again. Trump offered his replacement of NAFTA with a treaty fairer to rust-belt states like Ohio as an example of where things are headed under his leadership.

Turn America into the Drugstore of the World

You may have missed the headlines that last week, Trump invoked the Defense Production Act to give Kodak loans to convert one of its US factories into a pharmaceutical producer. The chemicals needed are similar enough to the film chemicals produced before, and in decreasing use, that the switch over is a cost-effective step.

The step creates jobs and increases America’s self-sufficiency in producing life-saving drugs. China has prevented American companies from shipping medical products produced in their factories in China to the USA.

The labor market trend since the 1970s has been one of offshoring and labor dumping. Jobs were sent to China while low-paid workers were brought in, devastating American wages. These were major campaign issues for Trump in 2016. He announced, “On January 23, 2018 at my desk in the Oval Office, I signed an order to impose a 50 percent tariff on all foreign-made washing machines.” Maybe secure employment with decent benefits and a pension isn’t just for boomers, after all.

Trump not only wants to bring jobs back from China but also to create new manufacturing jobs to revitalize America’s rust belt. As Trump has noted with his efforts to cancel and renegotiate trade deals, “We made extraordinary progress in reversing the dangerous tide of globalism. Over a period of four to five years this took place. Think of it, four to five years, what we have done is a miracle.”

This promise is basically a summary of the five above. Job growth and wage growth have stagnated for decades. Trump has already laid the groundwork to change that. 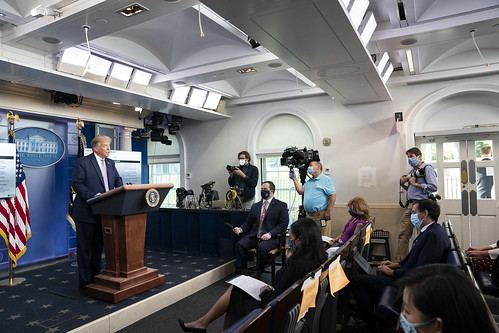 If Trump can get his message heard, Biden has little to counter it with other than bald-faced lies and howls of ‘the bad orange man says mean things.’ In the battle between all-consuming identity politics and putting bread on the table and securing a future for America’s children, to quote James Carville, it’s the economy, stupid.