On Friday, numerous individuals close to the president received positive tests for the infamous, yet highly survivable, COVID-19. While President Trump went to Walter Reed Hospital to receive medical care, others who contracted the virus went into their own self-quarantines to minimize transmission.

Hope Hicks, Melania Trump, Chris Christie, and Ronna McDaniel are just some of the folks close to the president who have contracted coronavirus. Each of these individuals is temporarily isolating themselves from others, with Christie checking himself into a hospital. 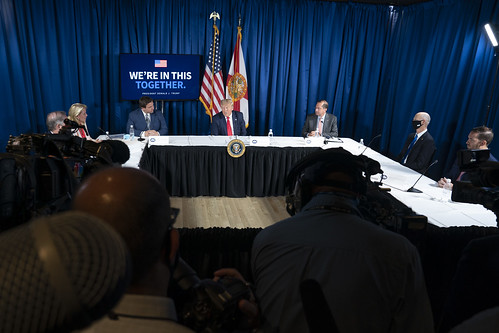 “President Trump in Florida” (Public Domain) by The White House

However, when it comes to the spread of the virus, officials close to the president aren’t out of the woods just quite yet. According to Washington Examiner, Trump campaign manager Bill Stepien, has received a diagnosis confirming that he is positive for COVID-19.

What to Know About Stepien’s Positive Diagnosis

The Trump campaign manager tested positive on Friday, the same day as the president, first lady, and Hope Hicks. Stepien’s symptoms are reportedly “mild” and “flu-like,” hence prompting him to telework on the Trump 2020 campaign.

As Stepien works remotely in quarantine, Justin Clark, the re-election campaign’s deputy manager will manage the headquarters of the campaign. Other officials, such as the vice president, will adopt a more prominent role in ensuring that President Trump wins re-election.

Likewise, the Trump campaign has signified that the two more debates between the president and Biden will still happen, even if the original dates of October 15 and 22 need to be pushed back.

Strong reactions have followed the news that the president and so many people within his inner circle tested positive for coronavirus. The back-to-back reports of one positive test after the other have therefore engendered conspiracy theories.

Some theories on the right assert that the president and other Republicans in his inner circle were intentionally “given” the virus to sabotage Trump’s re-election. Individuals who subscribe to this theory believe that it’s a little too convenient for so many top Republicans to be coming up positive for COVID-19 (especially this close to the election) while top Democrats test negative.

And all are tested daily, but traced to last Saturday?

Said from the start. China virus doesn't add up. Its too targeted. CHECK THOSE TEST STRIPS! I honestly believe this is how they are spreading this.This is an attack on the presidency!

Is this the arrow in their quiver?

Folks who lean to the left have different theories, though. Progressives have asserted that the president and other Republicans are lying about positive COVID-19 diagnoses as a means of skipping the upcoming presidential debates and garnering sympathy.

Of course, there is no merit or basis to the idea that Trump and others around him have concocted a plot to deceive Americans in this way.

Are you surprised that President Trump’s campaign manager and so many others in his inner circle have received positive tests for COVID-19? Be sure to inform us of where you stand down below in the comments section.