On Thursday, President Trump announced his firm position against approving additional funding for the postal service. Trump argues that if the funding is used to facilitate universal mail-in voting, the scope for election fraud will be massive. Nevertheless, the Democrats have been pushing hard for mail-in voting, citing the COVID-19 pandemic as the rationale.

Trump held an interview on Fox Business in which he noted that USPS funding is one of the major issues frustrating COVID-19 relief package negotiations. While numerous Americans and companies are battling with ongoing financial difficulties, Congress probably won’t reach an arrangement until September.

Pres. Trump says he would accept $25 billion in funding for U.S. Postal Service, including billion in supplemental funding for election resources, if Democrats concede to series of of funding asks as coronavirus relief package stalls in Congress. https://t.co/40RhZ3yK7w pic.twitter.com/otM6MgVVFR

If you can go to Walmart, you can vote in person

DEMS WANT TO USE USPS WHICH THEY "OWN" TO SCREW USA VOTERS IN '20 ELECTION .
Trump says he’s blocking postal funds because Democrats want to expand mail-in voting
The president made explicit the reason he declined to approve $25 billion in emergency funding for the Postal Service

“Now they need that money in order to have the Post Office work so it can take all these millions and millions of ballots,” Trump said. “Now in the meantime, they aren’t getting there—by the way, those are just two items, but if they don’t get those two items that means you can’t have universal mail-in voting.”

The fight over USPS financing has been continuing for a considerable length of time. In April, the Washington Post announced that Congress intended to give the USPS a $13 billion award in the first stimulus package, but Treasury Secretary Steve Mnuchin informed them the bill wouldn’t get signed until the Postal Service funding was removed.

The federal election about 80 days away, and there’s no sign that COVID-19 will be over at that point. Alarm bells are ringing for Democrats who plan to give all voters the alternative to cast a ballot from the safety of their own homes.

Voting should be done in person with ID 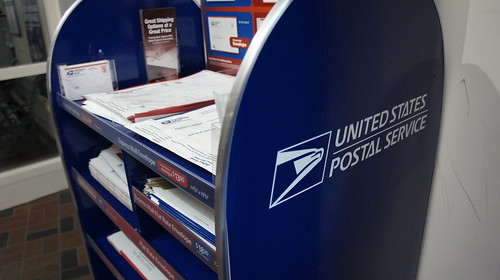 “New packaging display at the United Stat” (CC BY 2.0) by Aranami

Trump and other Republicans perceive compulsory mail-in vote as being too fraud-prone. Trump also proposed at one point delaying the election, rather than letting everyone vote by mail.

Before COVID-19, five states had universal mail-in votes. This year, owing to the pandemic, four other states and Washington, D.C., are sending out mail-in ballots to voters. Ten more states submit applications to residents so that they can register for postal voting.

Trump has referred to a recent New York City special election as an indication of widespread mail-in voting’s pitfalls. Due to problems with the mail-in ballots, a Democratic Congressional Primary was not called for more than six weeks, and for numerous reasons, more than 20 percent of votes received were not counted.