Election Day 2020 arrives in three weeks and two days. As the presidential race completes its home stretch, the campaign is far from over. These new few weeks ahead are critical and already, Americans are learning more about the candidates seeking office. 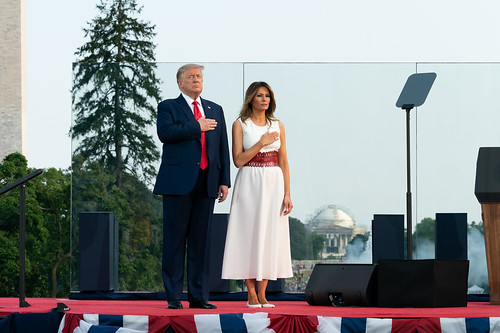 “Salute to America 2020” (Public Domain) by The White House

Last week, President Trump received some very good news and medical clearances for him to return to the campaign trails in person. For starters, Trump is medically approved for engagements with the general public; secondly, per White House Dr. Sean Conley, the 45th president also poses zero threat of transmitting coronavirus.

This news has given President Trump the green light to continue stumping for his re-election. Therefore, Trump will be spending time in Florida, Pennsylvania, and Iowa this week, confirms Fox News.

Battleground states will play an essential role in the 2020 presidential election. History has shown that Trump’s rallies tend to do well and garner massive support. Therefore, Trump’s time in Florida, Iowa, and Pennsylvania will be spent communicating with voters and letting them know why they should vote for him.

At this time, President Trump already has an advantage in battleground states. Recent polls have shown the president leading Biden in places like Florida and Arizona. Vice President Mike Pence campaigned in Arizona last week and first daughter Ivanka Trump will visit the Grand Canyon State today as well.

The Trump campaign, in the wake of the president’s upcoming travels, continues to bring attention to medical documentation that clears travel and gatherings. Critics, however, still claim that President Trump will be placing Americans in danger by going across the country.

Focusing on the Issues

This morning, President Trump interviewed with Fox Business. The interview covered a series of essential issues that maintain relevance in this election.

President @realDonaldTrump: If Joe Biden terminates my tax cuts it will increase taxes on all families, everything Biden says is a lie pic.twitter.com/YtCFGG6EGm

During a time when many folks are struggling to support themselves, having to pay more in taxes is the last thing that families want.

Will you be in an area that President Trump visits this week? What do you think the final weeks of the 2020 presidential election will look like? Be sure to let us know down below in the comments section.