Vandalism, riots, and violence in our nation’s cities are rapidly turning into a new normal when leftists don’t get their way. Americans have witnessed this throughout the summer and early fall while communities suffer as a result.

In light of the radical left’s habit of taking to the streets, some people have concerns about how left-wingers will respond to President Trump defeating Joe Biden. Already, certain reports of leftists planning to riot and shut things down for weeks on end have come up. 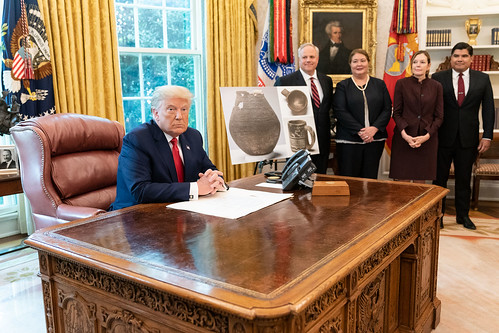 However, President Trump already has a plan for dealing with any planned violence that may occur upon him winning a second term in office, according to Washington Examiner.

On Friday, President Trump sat down for an interview with conservative commentator Dan Bongino. While speaking with the former Secret Service agent, Trump noted the various polls that actually show him beating Biden. The 45th president also explained that he is going to win the 2020 election and then “take care of business.”

Don’t miss my far-ranging interview with President Trump. It will air tomorrow exclusively on my free Rumble channel. We cover the Democrat’s threats of post-election violence, social media election interference & more. You can view it here 👉🏻 https://t.co/G2Wjvsa9dR

The president has previously stated that he will not stand for violence on Election Day; in so doing came Trump’s announcement that he also has the legal means to send in the military if violent outbreaks take place on America’s streets.

Critics of the president haven’t responded well to this and have only recently begun to issue clear denouncements of political violence.

Tightening Up Legal Penalties for Rioters

Believe it or not, President Trump is not the only one who is prepared to deal with riots that may break out on November 3, particularly if Biden doesn’t win.

William Barr, the U.S. attorney general, has pushed for federal prosecutors to charge perpetrators of Election Day violence with seeking to overturn the U.S. government. Charges of this nature would lead to sedition cases and likely set a tone for the management of political violence going forward.

She voted for Hillary.

But she absolutely isn’t voting for Biden… pic.twitter.com/Xb3BqVQFfW

Conservatives in different levels of government have also proposed and enacted various penalties against rioters. Some of the propositions entail banning convicted rioters from getting coronavirus federal aid; meanwhile, in Tennessee, individuals who partake in riots run the risk of losing their rights to vote altogether.

President Trump has repeatedly stated that riots represent a need for the nation to get tougher on crime altogether.

What do you think Election Day will be like in terms of civil violence and unrest? Do you think rioters should face sedition charges? Let us know in the comments section below!