President Trump announced during an appearance in the Rose Garden yesterday that his administration will take “immediate action” to throw “all available federal resources” into the fight to stop the riots and looting spreading over the nation. Trump said he will send in the military if states don’t deploy the National Guard. “I will fight to protect you,” the president said.

“I have recommended every governor deploy the National Guard in sufficient numbers to dominate the streets. We are ending riots and lawlessness, we will end it today.”

Trump continued to say that he is dispatching “thousands and thousands of heavily armed soldiers and military personnel” to end the rioting.

“I want organizers of this terror to be on notice that you will face severe criminal penalties. We cannot allow the righteous cries of peaceful protesters to be drowned out by an angry mob. The biggest victims of this rioting are peace-loving citizens in our poorest communities.”

They showed DC protests in a double box (like MSNBC), but kept the sound up on each to make it seem like you could hear the protesters clashing with police while Trump spoke. Just journalistic malpractice. pic.twitter.com/SDJtRMyqmk

Right after the speech, in an evocative moment, President Trump and his entourage walked across Lafayette Square in Washington DC, to St. Johns Episcopal Church, which was burned by arsonists during the riots.

Even the church’s new childcare center was deliberately torched. However, the church’s pastor, Reverend Rob Fisher. has said that it could have been far worse.

“I am happy to share with you that I could see no other real damage besides that one room, and quite a bit of graffiti and debris around the exterior of the church . . . Protestors easily could have done a lot worse to our buildings, but they chose not to do that. (The damage I saw to other nearby buildings illustrated this point.)”

"We cannot allow the righteous cries of peaceful to be drowned out by an angry mob. The biggest victims of the rioting are peace-loving citizens in our poorest communities and as their president, I will fight to keep them safe." pic.twitter.com/V3OqCjMjWA 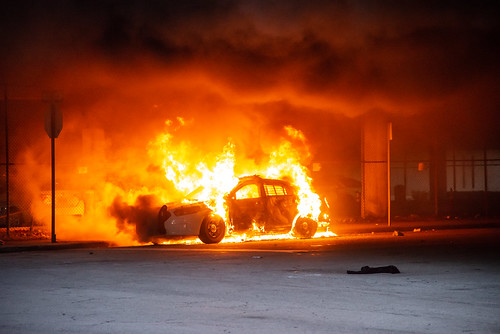