Over the course of President Trump’s 2020 campaign, he has received a sizable amount of endorsements.

Many of Trump’s most noted endorsements come from the law enforcement community. With the troubling surge of Democrats’ work to defund the police, the president has demonstrated via policy and rhetoric that he supports law enforcement and their work to protect and serve. 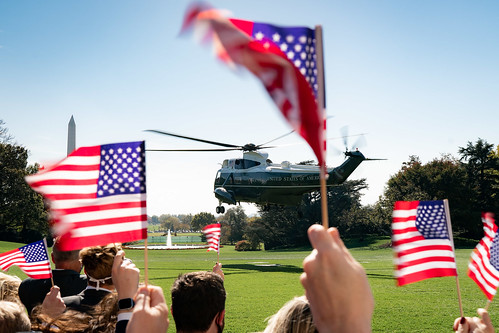 However, law enforcement is just one of many groups and bodies that supports the president. This Monday morning, the New York Post came out and officially endorsed President Trump’s campaign, as Breitbart News confirms.

In the New York Post’s endorsement of Trump’s re-election, they cited the president’s policies as the reasons why. The publication noted that under a second term of the current White House administration, “rising wages,” pre-pandemic “general prosperity,” and “explosive job creation” can return to the nation.

The New York Post furthermore called to “make America great again, again” by “[making] the right choice” come November 3. In additional statements, Trump receives even more accolades from the publication for protecting U.S. values against folks who write off the nation as inherently racist.

Finally, the publication ripped Joe Biden; per the New York Post, Biden’s strategy to “trigger new lockdowns” is ill-advised and now at odds with the latest recommendations from the World Health Organization (WHO).

As the 2020 presidential election approaches an end, the Trump 2020 campaign is still working. Several pro-Trump events are scheduled to take place over the course of this week.

President Trump himself continues his use of every avenue to make himself heard and persuade Americans to vote for him. On social media, Trump has specifically addressed communities that are hurting from Democrats’ leadership and urged them to vote for him.

In asking for their vote, the president is committing to bringing back the pre-coronavirus economy, while also lowering taxes. Progress made in the fight against COVID-19 and the development of a vaccine are also matters that Trump continues to remind Americans of in the final days of this election.

What did you think about the New York Post’s endorsement of President Trump? Do you think the 45th president will win a second term in the White House come November 3? Be sure to share your ideas and thoughts in the comments section down below!