Earlier this week, Muhammad Ali Jr., the son of the legendary boxer, gave an interview in which he stated that his father would oppose Black Lives Matter and that he would have supported President Trump. He also compared Antifa to an organization of Islamic terrorists.

#MicDrop #BLMRacist
Son of great Mohammad Ali: ‘‘My father would have said, ‘They ain’t nothing but devils.’ My father said, ‘all lives matter.’ I don’t think he’d agree of the BLM movement.

Speaking about BLM, Ali Jr. said, “My father would have said, ‘They ain’t nothing but devils.’ My father said, ‘all lives matter’ . . . I think it’s racist, it’s not just black lives matter, white lives matter, Chinese lives matter, all lives matter, everybody’s life matters. God loves everyone – he never singled anyone out. Killing is wrong no matter who it is. It’s a racial statement, it’s pitting black people against everyone else. It starts racial things to happen. I hate that.”

Ali Jr. went on to criticize the tactics of BLM, saying, “Don’t bust up sh*t, don’t trash the place. You can peacefully protest . . . Police don’t wake up and think, ‘I’m going to kill a [black person] today or kill a white man,’” Ali continued. “They’re just trying to make it back home to their family in one piece.”

Ali Jr. backed up the President’s assertion that Antifa is a terrorist organization, saying, “they’re no different from Muslim terrorists, they should all get what they deserve . . . Black Lives Matter is not a peaceful protest. Antifa never wanted it peaceful. I would take them all out.”

Ali Jr. repeatedly gave his support for President Trump’s pro-police, pro-law-and-order message. Toward the end of the interview, Ali Jr. noted that his father would have supported President Trump. 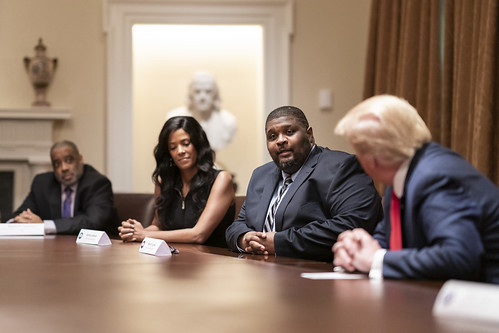 Mohammad Ali Jr. says the Democrats don’t care about anyone

Ali Jr. said, “I think Trump’s a good president. My father would have supported him. Trump’s not a racist, he’s for all the people. Democrats are the ones who are racist and not for everybody, these [Democrats] saying Black Lives Matter, who the hell are you to say that? You’re not even black. Democrats don’t give a sh*t about anybody. Hillary Clinton doesn’t give a sh*t; she’s trying not to get locked up. Trump is much better than Clinton and Obama . . . The only one to do what he said he would do is Donald Trump.”
Mohammad Ali is one of the greatest sporting legends in American and world history. His son,

Mohammad Ali Jr. runs his own small business after having recovered from severe poverty a few years ago. He has said that his father inspired people to ‘find the Muhammad Ali within you, live the purpose God made you for before you go back to God.’