“President Trump at the U.S. Military Aca” (Public Domain) by The White House

The Trump campaign has held a virtual meeting with the presidential debate commission in which they pushed for more debates on a bigger scale. The Trump campaign wants to hold four debates starting as early as Labor Day.

The virtual meeting was attended by Trump associates Rudy Giuliani and campaign manager Brad Parscale. Parscale noted that the campaign was prioritizing a broadened debate schedule and fairness during the debates themselves.

Parscale said, “as many Americans as possible need to see the stark differences between the accomplishments and leadership of President Trump and the failed record and sleepiness of Joe Biden.” The Trump campaign has offered to share the selection process for debate moderators with the Biden campaign. The debate commission has rejected the offer.

Joe Biden can't speak coherently for 5 minutes using a teleprompter in his basement with unlimited takes.

How is he going to debate President Trump live on stage for an hour and a half?

The Biden campaign refuses to let Biden speak for himself 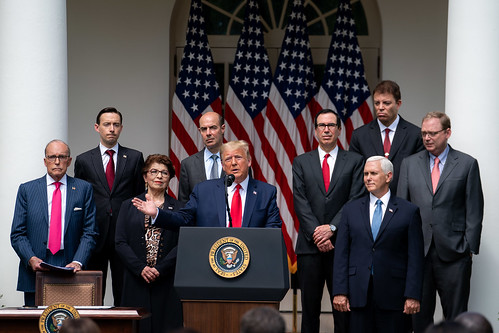 One of Biden’s deputy campaign managers has claimed that the Trump campaign wants to focus on the debates to distract from ‘unfavorable poll numbers.’ Trump has noted that Biden rarely speaks without his aides having total control of the media appearance. Debates offer the gaff-prone 77-year-old to show what he is really made of.

The Biden campaign representative said, “We are not going to ride the roller coaster of the ever-changing Trump campaign position on debates, nor are we going to be distracted by his demands.”
The Trump campaign has also reportedly requested that no debate be held during an NFL game, as was the case for most debates during the 2016 campaign season.

Trump will be re-elected. The riots are basically over. COVID is fizzling. The economy is rocking. Biden has yet to bumble through a debate yet. Massive Trump rallies to come.

Democrats have already puked out all their best attacks and are dry heaving at this point.

In 2016 the debate commission responded to such concerns by saying, “It is impossible to avoid all sporting events, and there have been nights on which debates and games occurred in most election cycles. A debate has never been rescheduled as a result.”

Fox News released a poll on Thursday which found Biden in the lead by 12 points, an increase of four points in one month. This, however, pales in comparison with the polls giving Hillary a 95% chance of winning in 2016.

These numbers are almost exactly flipped for the President. 62% of declared Trump voters will do so out of heartfelt support for the president while only 33% said they want to keep Biden out of office.